Why I am nominating Nadia Murad for Sakharov Prize 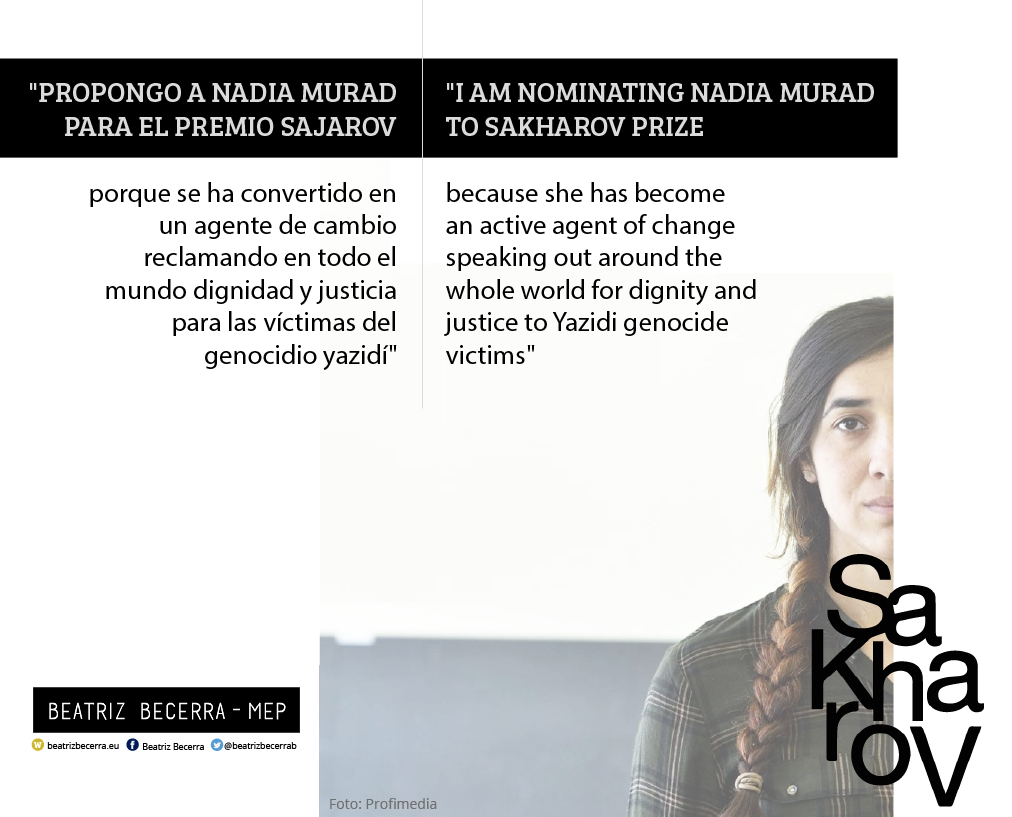 12 Sep Why I am nominating Nadia Murad for Sakharov Prize

Dear Colleagues,
I am not nominating Nadia Murad because she is one of the thousands of victims of Daesh’ barbaric occupation of Northern Iraq in 2014; or because she was a witness of the killing of her whole family, and hundreds of friends and neighbours just because they were Yazidi people; or because she was kidnapped, raped, brutally tortured, inslaved and sold several times during months of captivity…
I am nominating Nadia Murad because she decided that she would not to be a victim anymore. Because she, a young 23 years-old woman now, has become an active agent of change in the face of violent extremism, speaking out around the whole world for dignity and justice to Yazidi genocide victims, heading the process before the International Criminal Court. Because she believes in justice above all, and is now a determined defender of human rights, freedom of thought and rights of minorities.
As our colleague Pavel stated on behalf of the Czech Delegation, “she is a shining example that we need to stand up and fight for the values we believe in ALDE: freedom of conscience and expression, tolerance, human rights and courage for personal initiative, and which are also distinguished by the Sakharov Prize.”
Nadia has travelled the world tirelessly advocating for the more than 3,500 women and girls still held in captivity, has testified before the United Nations Security Council, the British Parliament, the Bundestag, the senates of France and the USA, Canada and Australia among others, met with the President of the European Parliament, the President of Egypt and the Norwegian Prime Minister…
On foot of her work, Nadia has been nominated by the Iraqi government and others for the 2016 Nobel Peace Prize.
As her ultimate goal, Nadia has embarked on a path of no return to bring the case of the Yazidi genocide before the International Criminal Court in The Hague. This genocide has been recognised in a UN report, by the European Parliament, the Parliamentary Assembly of the Council of Europe, Washington and Westminster. She will be represented by the lawyer Amal Clooney in this process.
Furthermore, she will be appointed UN Goodwill Ambassador by Secretary-General Ban Ki-moon next September 16th at the UN. Hopefully our colleague Marian Harkin will attend.
Thousands of women and girls continue to be held in slavery by these jihadist terrorists. The close to 1,600 who were able to escape are living in appalling conditions in refugee camps in Kurdish areas of Iraq. The Sakharov Prize, the most distinguished acknowledgment to freedom of conscience and human rights promotion, could definitely be the milestone needed to pave the way to justice Nadia started one year ago.
“Daesh took away my family, my future and my life. But what I keep in my heart, what I have always had and will always have is faith in justice,” Nadia said. “And all the women and girls who remain in their hands have justice on their side.”
I firmly believe that we all agree at ALDE group that this would be reason enough to invoke this magnificent instrument and award Nadia Murad and the Yazidi people the 2016 Sakharov Prize.
Let me just finish expressing my most sincere gratitude to (decir todos los nombres) 16 MEPs from 8 different countries for their contribution and support to this candidacy.